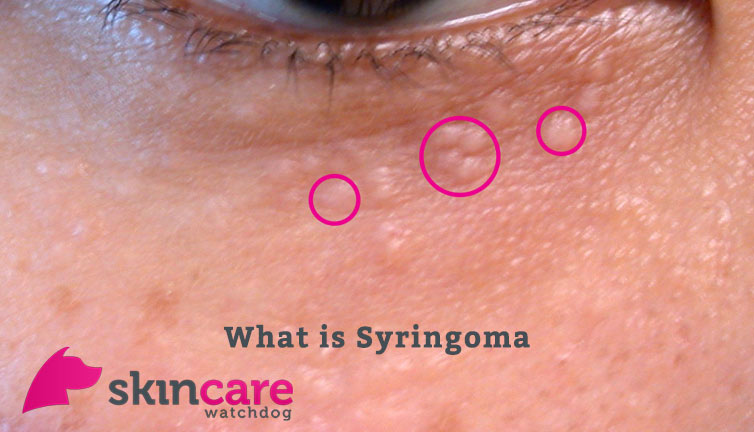 Have you noticed tiny hard white, yellowish or skin-colored bumps under your eyes? Do you consider them to be acne or persistent pimples? Well, they’re simply syringomas. Does that sound scary? There’s no need to be scared or intimidated because syringomas are harmless.

Syringoma is a non-cancerous tumor that forms in the ducts of the sweat glands. It is formed as a result of an overgrowth of cells within the ducts of sweat glands. The cells clog and enlarge the ducts, and form tiny hard bumps. The visible bump is only half of the syringoma. The other half lies below the surface of the skin. Syringomas are harmless.

Syringomas mostly appear on the lower eyelids and upper cheeks. Other common locations include:

Where to Seek Help?

Unfortunately, there is nothing you can do on your own to banish these tiny bumps. Steaming or squeezing will irritate and most probably scar your skin without getting rid of the syringomas. Over-the-counter creams for syringomas are available. These will most probably not be effective in the short term or long term, and may have undesirable side effects such as formation of deep craters that won’t heal on their own. The best thing to do is to see a dermatologist or a physician.

The cost of treatment varies depending on the technique, doctor and location. Treatment is considered to be cosmetic therefore you shouldn’t expect your insurance to cover the costs. A point to note is that syringomas are embedded within the dermis. As a result, compete removal is often successful. Recurrence is very much a possibility.